The unkonf 2017 in Mannheim - UnQuestionably a good time 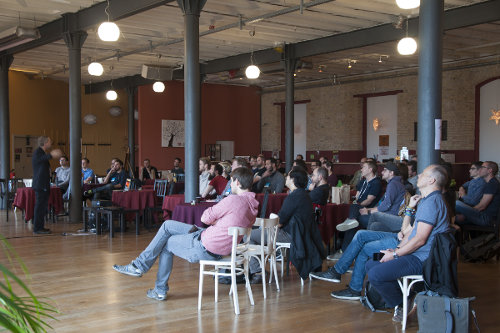 It was October 28th, when a lot of mighty developers took their ideas and notebooks on a journey to Mannheim (Germany) to meet each other on a glorious PHP conference and share their stories of honour. Okay, while the date and the destination is correct, it wasn't an adventurous quest of heroes like in the old ages, but nevertheless the unkonf in 2017 was once again an event you would regret not to visit. Like in 2016, the unkonf was hosted at bitExpert and they even managed to top the one of last of year. The unkonf is a barcamp where a maximum of 50 developer meet to share their ideas and presentations to each other and vote together which one of them will get a chance to be a speaker and get one of the precious time slots for their talks. I was one of the lucky guests to acquire one of the rare tickets and was there on that day.

Even though I missed the planned train to Mannheim, the next one brought me in time to the unkonf and I was punctual to get my goody bag of nice things and see the opening by Stephan HochdÃ¶rfer, welcoming all visitors in a room called "Dancefloor", which was a really big and classy location to start this conference. The goody bags were filled with sweets and even healthy food, like an apple and cereal bars, but also with coupons for the lunch, which were part of the bought tickets for this event. After Stephan's warm welcome, he directly led over to the keynote of Michelangelo van Dam, which was a story of the speaker's tragic life and how it had an impact on his decisions, that made him the man he is today. That keynote had also a huge impact on the audience including myself, meeting Michelangelo for the first time. It was a pleasure to finally meet him and a happy day for me, when he put our new PHP Usergroup Karlsruhe sticker on his with sticker crowded Mac. Just in a short time I already had fond memories of him.

Followed by the keynote, the voting started and many participants gave a short introduction to the talks they offered for the unkonf time slots. The offered topics were sorted by three grades of vote numbers and later placed on the official schedule for the event. Stephan and the speakers made it possible that no one got left behind with a talk and managed to include everyone's presentation to the agenda. Two of my talks were chosen for this conference:


Because of a related topic, Andreas Heigl and I shared one time slot for the unicode part and I looked forward to it. The schedule was set and a short break for preparations and the hard choices for preferred talks were the last things to do to be ready for the coming presentations. 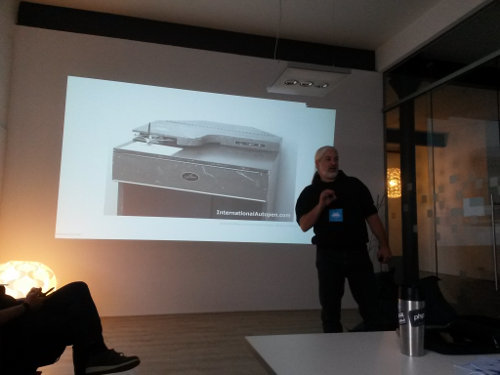 Too many interesting talks at the same time, but only one of the three rooms can be chosen and I made my choice. During Maximilian Berghoff's talk about Symfony 4 and Flex I also shortened the content of my first talk that followed his one. Symfony will get a lot of changes, that makes the micro framework Silex obsolete (the EOL was announced last week) and gives the Symfony framework a new form of flexibility and installation experience. Andreas' talk about unicode was very informative about the internal nature of UTF-8, UTF-16, emojis and how relevant it is for every aspect of a database and the communication with it. As for my ICU part, I presented my little intl-format project for easier formatting to international formats next to the PHP Intl extension classes, that are mostly already bundled with a PHP installation. I also participated on talks about serverless architecture by Niko KÃ¶bler and traefik by Andreas JÃ¤gle. There was another talk by Andreas Heigl about signatures that even led to a key signing "party" and creating and sharing Keybase accounts after the unkonf.

As for my part, I witnessed during my Mock Mock Mock slides how awesome community can be, when someone gave his thanks directly to Frank Kleine, who was also at my talk and is the author of vfsStream, that I presented on my slides. It also got a few new stars on github on that day. It is always a pleasure to see people being active and on-topic during those talks, asking questions about practices, alternatives or they just have something valuable to add. It's a good sign that a topic and the form how it was presented caught attention and interest by the audience.

Food for thoughts and for the stomach 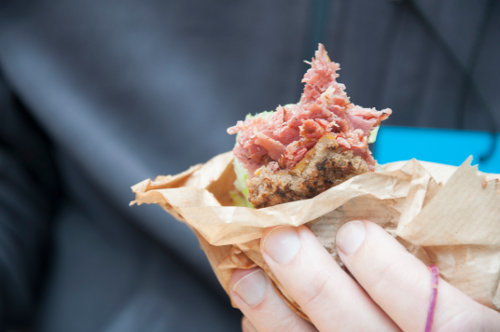 There were a lot of different beverages for the participants during the breaks and at lunch time, everybody got pastrami and pumpkin soup for the previously mentioned coupons by a foodtruck called "Laraâ€™s Kantinchen". Compared to last year's lunch, this was much lighter but still satisfying food and a good idea by the organizers. It didn't made me tired and I still had no need to get seconds in the evening. PaaS got a new meaning as "Pastrami as a Service". If some people wanted to, they could get themselves seconds, even for the soup.
There were a lot of pretzels available for everybody outside of lunch time too, so if anybody came without having breakfast first or got hungry between the talks, a prezel was always in range.

And what would be a break without socializing in the community? I met so many people in the past and an event like the unkonf is the best time to meet those, who usually live too far away from me and I rarely have a chance to meet. It was great to see many familiar faces again and talk with them about usergroups, PHP or just unrelated topics. You never should reduce a conference, barcamp or similar events to its talks and presentations. It's about (and especially) the people too.

Sad but true: Everything comes to an end 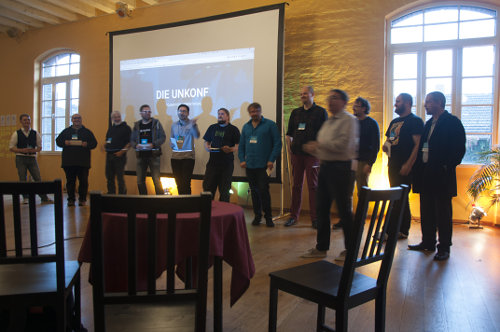 After all talks were done, everyone came back to the Dancehall for the final words by Stephan HochdÃ¶rfer and every speaker got a d-punkt voucher for a free book for every talk they held at the unkonf. A small photo shooting was done and after that, the "After-Unkonf-Party" began, where the mentioned signing security party happened. Officially over, we had no intention to leave the rooms too early and it became a nice evening with friends and new acquaintances.

I want to thank all the people and companies who made this event possible and I hope to be able to come back next year. This really is an awesome community and if you haven't thought about visiting the unkonf in the past, you should reconsider and meet all the people there in 2018.

Also many thanks to Stephan and bitExpert, who shared a few of the pictures made at the unkonf for this blog post. My phone's cam isn't that good at darker places, as you can see at the photo shown at "Teaching and learning".